Kittens, in their formative weeks 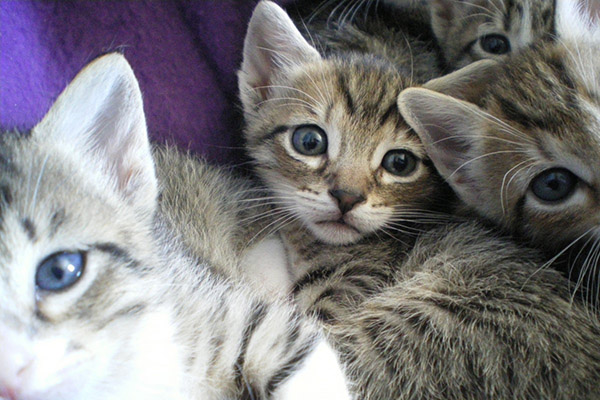 Kittens are born with their eyes closed and just basically sleep and nurse, and sometimes meow loudly. The queen stimulates their elimination, and they are completely dependent upon her for their first few weeks. They will communicate with the queen vocally on day 1; and by 4 days they can clumsily walk to their preferred teat for nursing. Because olfactory sensation is working very well right at birth, it is their main sense along with the tactile stimulation of touch, especially on their face. A feral queen can teach her kittens to be afraid of anything (especially humans) as early as 2 days old. There will be differences in socialization toward humans that extend into adulthood when a kitten spends these first few days with a truly feral mom! Eyes open around 7-10 days; and, between weeks 2 and 3, the ears open (although they do hear with closed ears by day 4) and those senses now contribute in the transition to the next phase, the development of the ultimate predator. Speaking of, those needle baby teeth begin to bud between weeks 2 and 3! Poor mom.

The socialization phase is vitally important; and, it proceeds separately with each species. First and most importantly, cat on cat socialization is being learned. Kittens are responsible for all gait patterns, adult locomotion, and most body postures by weeks 6 to 7. So interacting with others begins immediately! Or it does not, based on the individuals environment and exposure, and on a species to species basis. But remember that no experience equals a bad experience. So if a kitten is isolated early, their socialization could suffer greatly. Kittens that do not hang out with other cats at this young age will develop very little social skills for the group setting. They also learn by visual inspection, so grooming and even hunting skills (through play) are being learned as early as one month of age! Starting at 4 weeks, mom is getting sick of the nursing; but, sometimes she does not completely quit until they are 7-8 weeks of age. At the age of 2 months, most kittens are eating solid foods or prey items brought by mom. And studies have shown that the earlier they stop nursing, the more effective hunters they become! The budding stars are helping her eat her prey items by week 4, and stop nursing immediately. They will all follow the queen on her hunts by weeks 15- 18, and most kittens are self-sufficient predators by 6 months of age! Cats usually have a specialty or preference in what they hunt, and mom’s influence is huge in this decision.

Now it is time to leave the house, especially for the young boys. And unless resources allow for succession planning, the little queens must also leave home! The best chance of any cat having a lifelong social mate is by teaming up with a littermate. These are often same sex pairs, 2 boys or 2-3 girls, in the barn cat setting. And though some genetic tendencies, like a boldness gene, do contribute these first few months are vital to shaping the level of socialization in each cat’s life. If they do not meet dogs until they are 6 months, the acceptance of a dog will be limited throughout their life. If you adopt a feral kitten that has had little to no human contact at the age of 6 months, socialization with humans may be greatly limited. So lots of exposure to a variety of animals and to a variety of people results in the most favorably socialized pet cats. And this process should begin as early as possible. Interestingly enough, the little toms become sexually mature as early as 6 months of age in the pet setting, or with the breeder, but as late as 18 months in the wild. I guess they have to put it on hold until they can fight for their right to mate? Or maybe it takes about a year to find a good place? Or maybe it is just like being a freshman in high school; none of the girls pay attention that year!

A general rule of thumb in animals is that the longer time spent with their mother, the more intelligent the species. And although post-college children living at home may challenge that rule, it is generally true. So, as I often tell clients, the cat is more instinctual and predictable and intelligence is just not their game. Although some are smarter than others, the primal nature of their behavior is one of the most beautiful things they offer us as a species. They are simultaneously the perfect predator and a perfect model for meditation and yoga masters. They can be so peaceful as they rest and groom, and so seemingly vicious during a hunt. And we all know that no one consistently acts as cool as a cat. And on a pound for pound basis, they are the most powerful, the fastest and the most aggressive athlete that has ever lived and number 2 is not even close! I am always amazed that this is all learned in 6 months, and a good chunk of it by 3 months! So enjoy kitten season and keep this information in mind during the formative weeks.

Vaccinations – What are they?

Some Treatment Options for Cat Arthritis 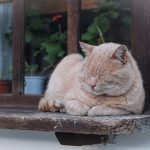