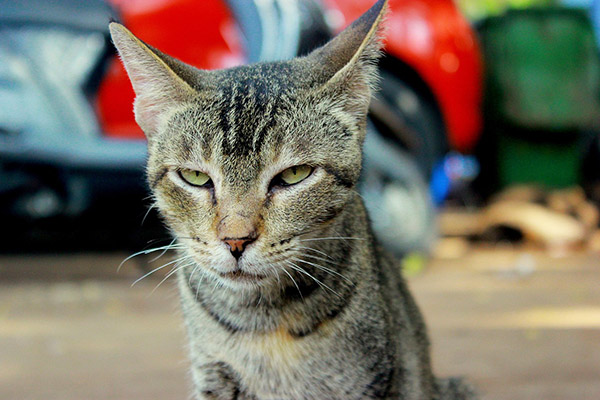 Constipation can be defined as an abnormal accumulation of feces resulting in difficult bowel movements. This may result in reduced frequency or absence of defecation. The feces are retained in the large intestine or colon. Since one of the functions of the colon is water absorption, the retained feces become hard and dry, which makes fecal passage even more difficult. Constipated cats strain in an attempt to defecate, resulting in abdominal pain. Some constipated cats may pass small amounts of liquid feces or blood. They will often vomit during and/or after straining to defecate, whether or not feces are produced. They will also often lose their appetite and/or become lethargic when they are constipated. They might defecate outside the box. They may start out in the litterbox trying to defecate, but little or nothing comes out until they start to walk away, and the physical activity of walking helps some feces fall out to the ground. Alternatively, they may defecate wherever they are if they get the urge, which is often very frequently since their colon is so full, and a litterbox may be too far away.

Factors associated with causing constipation include:

Constipation is a condition seen most commonly in middle-aged and older cats.

This term refers to a dilated and weak colon that causes severe constipation. Megacolon may be seen as a primary problem, or following long-term constipation. When the colon becomes distended with fecal material over a prolonged period of time, its ability to contract may be reduced or lost, resulting in megacolon.

How are constipation and megacolon diagnosed?

In most cases, a diagnosis of constipation can be made on the basis of the cat’s clinical signs. Radiographs can confirm diagnosis. Affected cats usually strain unsuccessfully to defecate, and may cry in pain. Any feces passed are hard and dry. Tests, such as abdominal and pelvic x-rays to look for pelvic injuries, colonic strictures or tumors may be needed. X-rays are the primary test for the diagnosis of megacolon. Bloodwork is also helpful in diagnosing any underlying causes of dehydration, such as kidney disease, which can predispose the body to constipation.

How can constipation and megacolon be treated?

Treatment varies depending on the cause of constipation. If an obstruction such as a colonic tumor is present, surgical treatment may be performed. Once a tendency has developed, treatment should be performed.

Initial treatment of a cat with constipation may involve administration of enemas and manual extraction of feces by a veterinarian. The latter may necessitate anesthesia. Treatment of dehydration with subcutaneous fluids may also be needed in cats that have become dehydrated. If the constipation recurs or becomes a long-term problem, continuous therapy may be needed to prevent recurrence. A wide variety of treatments are available to soften the feces and promote regular bowel movements. Obviously, diet plays a primary role with the development and the treatment of constipation. An all dry diet will predispose the cat to constipation. Some cats will have alleviation of symptoms with an all canned food diet. Fiber plays an important role in proper bowel motility. Canned pumpkin, Metamucil powder and psyllium husk can be added to the diet when accepted. Those more severely affected may need drugs that stimulate contraction of the colon. The doses of all of these drugs may need to be altered to produce the desired effect. Lactulose is a liquid medication available to manage constipation. Given twice daily, it can be very effective in the management of constipation. Cisapride is a promotility agent enhanced colonic motility. Ideally, cats should defecate at least once every other day. Over a period of time, resistance to the treatment may be found, necessitating an increase in the drug dosage or a change in therapy. Once a tendency has developed for constipation, we encourage the owner to treat pre-emptively. Constipation is best treated as the cat eats. Once constipation reaches the colon, only an enema can alleviate the problem. The extreme of constipation is called obstipation. Obstipation is the cessation of the movement of feces. At this point, only de-obstipation, or manual evacuation will help the patient. No changes to the treatment protocol should be made without consulting your veterinarian.

It is important to ensure that there is always access to enough large, clean litter boxes dispersed throughout the home so that frequent defecation is encouraged.

If megacolon develops, or if the constipation is severe and medical treatment is unsuccessful, surgery may be recommended, but this is uncommon. Surgical treatment involves removal of most of the colon, called a partial or sub-total colectomy. Most cats do very well with few side effects following this surgery.

What is the long-term outlook for a cat with this problem?

The long-term outlook varies according to the cause of the constipation; however, the vast majority of cats can be adequately managed without surgery and resume normal, healthy lives. 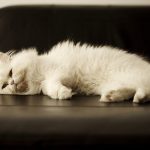 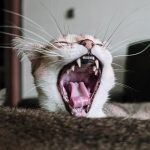